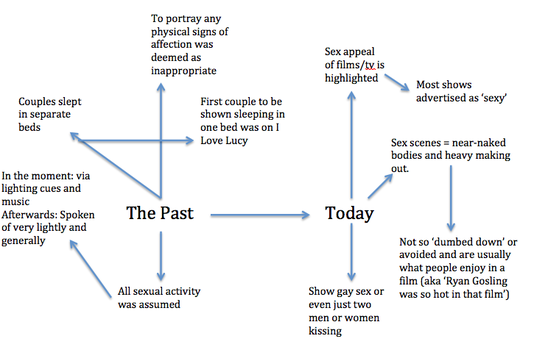 On the left, an example of possible comparison between past and present of sexuality in the media.
A field experiment on the effects of mass media exposure on acceptance of violence

Two hundred seventy-one male and female students served as subjects in an experiment on the effects of exposure to films that portray sexual violence as having positive consequences. Some of these subjects had signed up to participate in a study ostensibly focusing on movie ratings. They were randomly assigned to view, on two different evenings, either violent-sexual or control feature-length films. These movies were viewed in theaters on campus and two of the movies (i.e., one experimental and one control) were being shown as part of the regular campus film program. Members of the classes from which subjects had been recruited but who had not signed up for the experiment were also used as a comparison group. The dependent measures were scales assessing acceptance of interpersonal violence against women, acceptance of rape myths, and beliefs in adversarial sexual relations. These scales were embedded within many other items on a Sexual Attitude Survey administered to all students in classes several days after some of them (i.e., those who signed up for the experiment) had been exposed to the movies. Subjects were not aware that there was any relationship between this survey and the viewing of the movies. The results indicated that exposure to the films portraying violent sexuality increased male subjects' acceptance of interpersonal violence against women. A similar nonsignificant trend was found on acceptance of rape myths. For females, there were nonsignificant tendencies in the opposite direction, with women exposed to the violent-sexual films tending to be less accepting of interpersonal violence and of rape myths than control subjects. Explanation of the data on the basis of “attitude polarization” and “reactance” effects are discussed in the study so as are the conditions of the present research in terms of the type of stimuli used, the “dosage levels” of exposure, and the duration of effects in relation to future research and a general social climate promoting a sexist ideology.
[Research at the University of Manitoba, Canada, 1980, published 1981]

About mass media influences on sexuality

The mainstream mass media (television, magazines, movies, music, and the Internet) provide increasingly frequent portrayals of sexuality. We still know relatively little about how this content is used and how it affects sexual beliefs and behaviors. The few available studies suggest that the media do have an impact because the media keep sexual behavior on public and personal agendas, media portrayals reinforce a relatively consistent set of sexual and relationship norms, and the media rarely depict sexually responsible models. More longitudinal research, especially with early adolescents is needed to learn more about how media content is attended to, interpreted, and incorporated into developing sexual lives.